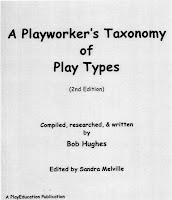 PlayEducation provides its services in the form of courses, seminars, weekend problem-solving residentials, conferences and professional debates. It’s main thrust is in developing useful and authentic practical responses to children’s play needs and identifying and developing the credible scientific arguments which support and clarify why children need to play and why societies like ours must make provision for play.

The scientific evidence shows that opportunity to play must be viewed as more than just a right for our children, and rather as a life essential. For it shows that children who do not play cannot play not enjoy the scientifically proven benefits of playing, e.g. a bigger more highly organised and flexible brain refined to the adaptive needs of the present, heightened resilience and optimism, muscular growth,  flexible problem solving capacity, mental mapping and memory, the ability to adapt to today’s challenges and improved physical and mental health, and non-players have a much greater chance than playing children of suffering the effects of a condition known as play deprivation, which in mild doses makes children irritable and unhappy (Huttenmoser and Degan Zimmerman 1995) but which in more concentrated forms may turn some children into killers and mass murderers(Brown 1998)


Playing is an integral component of the human evolutionary process and play in one of its forms has probably been a part of the human behavioural repertoire for many millions of years.(Hughes 1996a)

Play is essential to brain growth and to balanced neurochemical activity.(Rosenzweig 1962, ’71, 72 and Damasio 1994)

The drive to play exploits biologically ‘sensitive periods’(Huttenlocher 1990) during which certain kinds of experiences trigger rapid brain growth. Children under ten years of age are thought to have the potential to grow brains twice the size of those of children over that age. Some scientists regard play as one the main factors ensuring that the human species has not become extinct(Lorenz 1972, Sylva 1976), because of the flexibility play gives them when adapting to changing environmental and meteorological conditions.

Although play itself is vital to human survival and development and to our identity as a species, and is important for those reasons, because many children around the world are being deprived of the space, time and freedom to play, our concerns are with the development of appropriate practical opportunities for children to play too. Developing, operating and maintaining these artificial opportunities, e.g. summer playschemes, After School Clubs and Adventure Playgrounds, is known as playwork.

Through the vehicle of PlayEducation, Bob Hughes has provided high quality playwork training and education to those who wish to develop, operate and/or maintain provision for children’s play for over thirty years now. His course materials provide fascinating insights into the biological and evolutionary reasons why provision for play must satisfy developmental and evolutionary, rather than simply financial and political criteria. Through PlayEducation, Bob has worked with most major local authorities, voluntary agencies and relevant charities in the UK and Ireland.

As well as writing ‘Notes for Adventure Playworkers’ in 1975,  ‘A Playworker’s Taxonomy’ and ‘Play Environment’s’ for PLAYLINK, and ‘The First Claim’, and ‘Desirable Processes’ for PlayWales, Bob has also written the major textbook ‘Evolutionary Playwork’ in 2001, (revised in 2011), and PlayTypes—Speculations and Possibilities (2006). He also contributed a chapter on play deprivation, to ‘Playwork Theory and Practice’ (2003), a chapter on locomotor play and environmental modification in Several Perspectives in Children’s Play (2007), and a chapter entitled Four Playwork Meditations, in A Place for Play (2008). He was Managing Editor of the International Play Journal from 1993–1996, and still occasionally organises the Annual Play and Human Development Meetings.

In 2000, Anglia Ruskin University awarded Bob a Masters Degree in Playwork Development Studies and The Mike Taylor Memorial Prize for Originality and Innovation in Professional Scholarship. In 2008 he was given the Lifetime in Play Award from London Play

If you would like further information about the work of Bob Hughes or PlayEducation, or would like to discuss how we can help you develop playwork courses or quality provision for your children, please contact us at: PlayEducation@ntlworld.com or visit the rest of this web site.